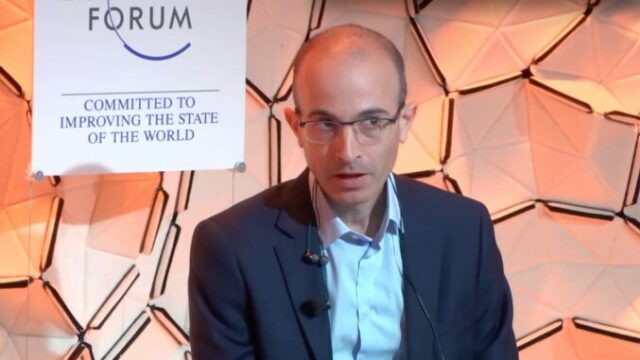 Human beings will need to “relearn how to see and walk”, according to Klaus Schwab’s lead advisor, Noah Yuval Harari, who warned humanity to get ready for a future that will be lived in virtual reality, divorced from the “physical and biological” world.

Harari taunted humanity with the disturbing claims during a discussion with podcaster Tom Bilyeu published on Tuesday.

Harari, an author and World Economic Forum (WEF) adviser, emphasized humanity’s capacity for change and abstract thinking in his contemplation of a technologically-driven paradigm shift in the human condition with the framework of virtual reality.

According to Harari, humanity will need to “let go” of everything they hold near and dear, including eyesight and the ability to walk.

Maybe the most important quality to survive and flourish in 21st century is to have mental flexibility — not just to keep learning and changing again and again — [but] also to keep letting go.

But what does it mean that I have to relearn how to see and walk? As virtual reality improves — and with all the talk of the metaverse and so forth, which we will  discuss later on — increasingly, it’s likely that [there] will be many more activities shifting from the physical biological world that we know into a new reality — a virtual reality — which has different physical and biological laws.

Harari asked, “Can we as humans just shift to the immaterial realm of the Metaverse and leave our biological bodies behind? Or is it impossible or even dangerous to try and separate our kind of mental existence from our bodily and physical existence?”

The comments about relearning to see and walk are just the latest in a long line of disturbing comments emanating from the corridors of power at the World Economic Forum in Davos.

Klaus Schwab’s World Economic Forum recently declared that people have no right to own their own car and can instead “walk or share.” According to the WEF, far too many people own their own vehicles and this situation must be corrected by pricing them out of the market.

Thousands of private jets fly into Davos each year for the WEF’s annual summit, but according to Klaus Schwab ordinary people should not own their own car. WATCH:

What Do I Need To Make It In Business?