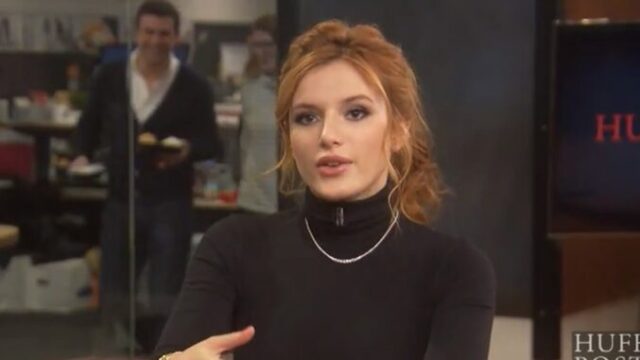 Former Disney child star Bella Thorne has blown the whistle on the Hollywood pedophile ring, alleging that she was molested and abused during her years as a child star, and revealing a Hollywood director sexualized her when she was only 10 years old, saying he accused her of trying to “flirt” with him.

Bella Thorne revealed the alleged incident, but didn’t identify the director, during an interview on fellow celebrity Emily Ratajkowski’s podcast.

“I had a director give me feedback once and I was ten and they call the casting director, who calls my agent, and my agent calls my mom. And they’re like, ‘So she’s not moving forward because the director felt like she was flirting with him and it made him really uncomfortable,’” Thorne recalled. Warning: explicit language.

Thorne said it would have been impossible for her to have flirted with the director.

“You’re in a director session, you can’t really like say or do much. You do the scene, you say hello, you walk out — there’s no time to like, ‘Let me go sit on your lap or like, make you feel uncomfortable.’”

Ratajkowski replied: “Putting it on a 10 year old child and making it like they made an adult man uncomfortable is insane. And then that was relayed to a casting director who was happy to relay that to your mom. Like if you need a more fucked up story about Hollywood and like pedophilia and the sexualization of children, like I don’t know that there is one.”

As reported, Bella Thorne has alleged she was “molested” and “physically abused” during her years as a child actress in the entertainment industry, from the age of six to 14, saying those around her “did nothing” about it.

The former child star also discussed in a recent interview that she was molested from age 6 to 14 while working for Disney.

In the interview, the starlet, Thorne was asked by an audience member about the transition between being tightly controlled by Disney and to where she can now freely express herself.

“The transition, it’s definitely tough. But it is what it is. It’s like anything in my life. If you read the book you’ll be like, ‘Haha transitioning from Disney to this was f****** easy.’ I don’t know. Getting molested for f****** from when your six to your fourteen seems like way harder circumstances. You’re being physically abused all the time. Seems like a much more difficult situation than f****** having paparazzi following you since you were twelve. Um, I don’t know. I was still being molested when paparazzi were still f****** following me. So it’s pretty hard in my mind to think of these big flashlight photographs, and everyone thinking they know me and talking about me, but having no idea the type of mistreatment that I was still dealing with at that time. That everyone around me saw and did nothing. So, I don’t know you tell me what’s so hard. ‘Cause that to me, way harder than any of this other shit I deal with on a daily basis.”

Not only did Bella Throne claim she was being sexually abused at a very young age while working for Disney. But she also claims in her statement that people knew what was going on and did nothing to stop the abuse.

The Vaccinated Now Account For A Majority Of COVID Deaths